Day #47: 10 Great Running Quotes – and short reflections on each… 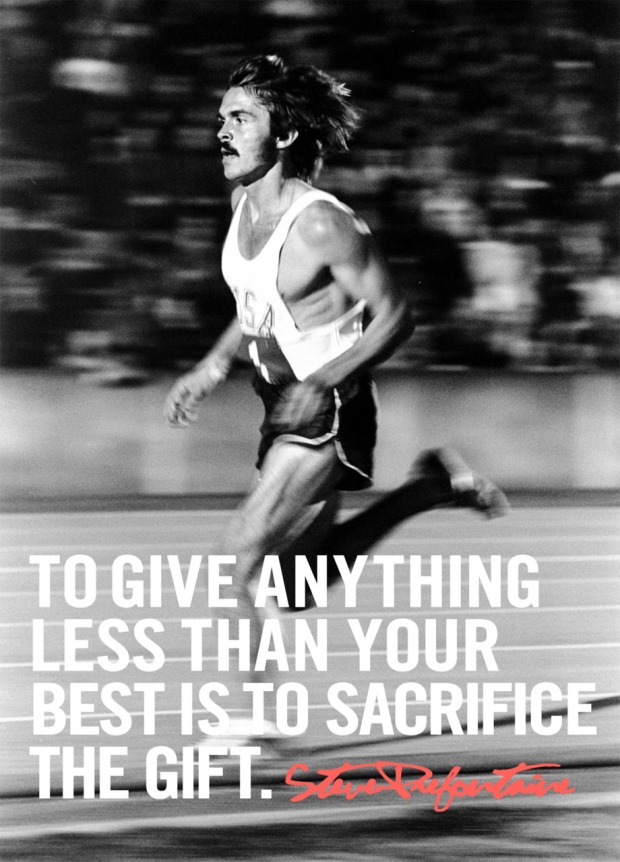 “Out on the roads there is fitness and self-discovery and the persons we were destined to be.”~George Sheehan

Dr. George Sheehan has long been an inspiration to me. His philosophical writings push and pull and dissect the art and soul of running and give it back to the world in understandable bits. This quote speaks to me because it reminds us that a main goal of running should be an effort at self-discovery: to finish the daily run with more insight into why we exist and why we long to run.

“But those who hope in the LORD will renew their strength. They will soar on wings like eagles; they will run and not grow weary, they will walk and not be faint.”~Isaiah 40:31

I adore the Bible and ever since I was a small 7th grader sitting in the seats of my first movie, “Chariots of Fire,” this verse has been both an inspiration and comfort to me. As Eric Lyttle reminded himself and the crooning crowds that followed him, when we hope in the true life-giver, we have an eternal endurance which this world does not expect. When champions, both world class and mundane, tap into this source of strength, miracles happen.

“My running was very simple; it was out of myself.” ~Emil Zatopek

Emil Zatopek is such an inspiration. Not only was he perhaps the most disciplined of history’s champion track runners, but he was renowned to be a truly loving man – to his neighbors and in his life-long relationship with his wife. I especially love this quote because Emil speaks to the notion that the greatest, most inspiring running emanates naturally from champion people.

“If one can stick to the training throughout the many long years, then will power is no longer a problem. It’s raining? That doesn’t matter. I am tired? That’s besides the point. It’s simply that I just have to.”~Emil Zatopek

Great runners, as well as great people, often find motivation in the midst of – and because of – adversity. Zatopek certainly lived out this principle. After decades of very difficult training, he discovered that the only necessary thing was to run. He had to run – and so all of the obstacles fell away.

“I always loved running…it was something you could do by yourself, and under your own power. You could go in any direction, fast or slow as you wanted, fighting the wind if you felt like it, seeking out new sights just on the strength of your feet and the courage of your lungs.”
~Jesse Owens

I just came across this quote tonight – and it took me a couple of readings, and the readings of another of his quotes, to quickly push this to the top of my list of great running quotes. First off, Jesse Owens was clearly a bright man, and this is very important to understand given all of the politics of his day and his place in history. Secondly, this quote expresses precisely my joy of running. Like Jesse Owens, I love the freedom of distance running!

“You must do the thing you think you cannot do.” ~Eleanor Roosevelt

Here is another quote I discovered tonight as I researched the most inspirational thoughts of the great runners of history. Though – as far as I know – the first lady was not a runner, this quote has all of the spunk and life of any phrase I would wish to repeat to myself over and over. For, in these words, Mrs. Roosevelt reminds us to dream the impossible, to act beyond the rational… in short, to have faith.

“No one can say, ‘You must not run faster than this, or jump higher than that.’ The human spirit is indomitable.” ~Sir Roger Bannister

The first sub 4-minute miler gives voice to his faith in the limitless possibilities of the man who strives in faith. It is the DNA of mankind to push and persevere and overcome. To go faster.

“To be number one, you have to train like you’re number two.” ~Maurice Greene

This quote reminded me of the principle of humility in our running. Humility is a necessary – and oft forgotten – ingredient in the champion runner. We must each see our limits – while at the same time believing in our ability to meet any challenge. It is the dance of humility and hubris – of the winner and the loser – who is necessary to define the victor’s identity. Maurice inspires us to train with humility, and then to race with all-systems-go faith that we are the best.

“My philosophy on running is, I don’t dwell on it, I do it.” ~Joan Benoit Samuelson

Joan Benoit Samuelson – of Maine stock – is such a cogent, succinct personality – at least from my distance. And so this quote perfectly fits her and is a reminder that, at base, running is simple – and just needs be done.

Now, get out there and create some quotable inspiration of your own!