Listen to your heart…

It was only a matter of time…

After 30 years, I am finally committed to training with a heart-rate monitor. My first realization: my wife has been right all along – I do have a fickle heart. After all, according to the monitor, my heart rate during yesterday’s run was all over the map. During my first mile – as I did my best to run slow, to be cool, and to keep at my target heart rate of 142 (more on how I got that number in a moment) – was fair — but my heart rate was 7 beats too slow. Hmmm… so, like in those track days of the past, I altered my effort level/my pace. Just a little tweak. Clearly, in my feeble attempt to raise my heart rate just 7 bpm, I jacked my running speed up a good 30 seconds per mile. (One thing my wife didn’t have to convince me of is my tendency towards the edges – of pace, spending, speeding tickets, etc) Not surprisingly, my 2nd mile logged in at a 158 average heart rate.

That wasn’t all my fault. There was a small mountain I had to contend with. And so, while I tried to pump my heart 7 beats faster, I had to make great efforts to only gently attack the hill. Added to this, we are in the so-called “rainy season” of the Central Coast (which must just be a crumb we offer up to our frozen East Coast counterparts, for most days during this season are 70 and sunny… ) Anyway, the rain that we do get does produce some tricky trail running variables including the mud clod which attaches itself tenaciously to the bottom of the traditional waffle sole (or waffling soul, as it were), and makes any attempt at consistent effort/pace/willed heart rate a great folly.

Let me go back a bit. I purchased the Polar H7 heart rate monitor – at $67 a very affordable option for iPhone 4S and iPhone 5 and Android-carrying runners out there. (You know who you are!) When my window to run burst open — my wife took the kids out for Jamba Juice — I cut through the irascible packaging, speedily perused the manual, switched into my running gear — and googled “best running apps.” A list of about 12 apps loaded up which I quickly reviewed. After nearly 2 1/2 minutes of research (my window was closing quickly) I decided upon Endomondo – designed for social triathletes (not sure if I fit either of those two descriptors??) It seemed user friendly… and, most importantly, it quickly synced with and recognized my heart rate signal via the Blue Tooth technology which is the way the H7 talks to your phone. I had actually a minute earlier concluded that I should just settle for Polar’s own app called Polar Beat, as it was designed specifically for Polar monitors. Only problem, it wouldn’t recognize my heart rate instantaneously. And for me, with my nearly closed-out running window, seconds are gold and instant is non-negotiable. I ended up with Endomondo.

All in all, the run was good, and the biofeedback very intriguing. My average heart rate ended up at 148 – just 6 beats above my goal. I saw for the first time the elevation gain of one of my favorite short loops (709 ft.) And, most fun of all, I discovered Endomondo’s integration of a GPS-tracked map of my run and a graph of my heart rate. This is so cool because it enables you to touch any point in your run on the map and see where your heart rate stood – and vice versa. (see below) So, for example, I could touch the map on a steep ascent and view the changes in my heart rate from second to second! No doubt, we have come a long way since my high school days in the ’80’s and since my coaching days of just 10 years ago when we still used a wheel to measure courses… 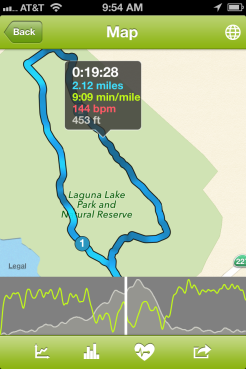 So, that’s how I’m listening to my heart these days. How about you?

By the way, I wanted to give you, quickly, the way at which I calculated my target heart rate. I decided to use Dr. Phil Maffetone’s 180 formula, and I found a great synopsis of the formula on who other than Mark Allen’s website. Here’s the skinny taken directly from his site:

3. Take this number and correct it by the following:

-If you do not workout, subtract another 5 beats.

-If you workout 3-4 times a week keep the number where it is.

-If you workout 5-6 times a week keep the number where it is.

-If you workout 7 or more times a week and have done so for over a year, add 5 beats to the number.

-If you are over about 55 years old or younger than about 25 years old, add another 5 beats to whatever number you now have.

-If you are about 20 years old or younger, add an additional 5 beats to the corrected number you now have.

PS – for more on this target heart rate — more scientifically known as the Maximum Aerobic Threshold, head over to www.philmaffetone.com.

7 thoughts on “Listen to your heart…”