A Review of Born To Run

I am nearly finished with my second consecutive listening to Christopher McDougall’s masterful running “must read” Born To Run. And I am loving it as much the second time around as I did upon first listening. Fellow mountain runners over here on the central coast of California who hear me suddenly burst out laughing just as I round the crest of the long haul up Madonna Mountain must be scratching their heads. How can he be laughing while he’s still plugging up the mountain? My excuse, McDougall’s narration of yet another one of “Barefoot Ted’s” beatnik discourses on art or McDougall’s recounting of Ultra prodigies Jen and Billy’s insane antics… And one late morning, as I was coursing around my favorite mountain for the third time before beginning my final ascent to its summit, my expression was an aghast “No!” as the author told of Ultra great Ann Trayson’s decision to quit the Leadville 100 at mile 90. Thankfully, a moment later her husband cajoled her into finishing the race (and a new record, of course), and we both continued on from our moment of stupor.

But McDougall’s masterpiece is more than a bunch of anecdotes. It is the running book that was to be written. The book we die-hard runners – we “All-in” crazies – have been waiting for. Let’s face it: excellent running literature is scanty as a general rule. We have John Parker’s “Once a Runner” – on the fiction/novel side – as well as a whole number of fairly strong training recipe books. We even have Sandrock’s excellent “Running With the Legends” which spotlights 21 of history’s greatest runners, their bios and details of their training regimens and personal philosophies. And there are a host of autobiographical treatises by the many star Olympians over the years – Joan Benoit Samuelson’s out of print “The Running Tide” and Meb’s “Run To Overcome”, for example. And Dr. Timothy Noakes’ “Lore of Running” has its deserved historical place and reserved space on every runner’s bookshelf (or tablet:) But few are the running books which at once captivate and draw one in as does the riveting novel, inspire, teach and challenge. McDougall’s Born To Run does all of this and more. It even presents several compelling and “subversive” – to use a “Barefoot Ted-ism” – scientific proofs about running shoe technology, nutrition and life. 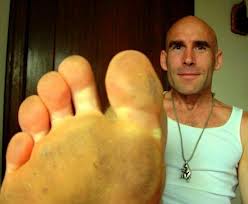 Before you are convinced that I am lemming-like and am just following the herd before me which has poured out praise on McDougall’s running commentary, I assure you that I come from the sceptic’s camp. Though this is the book I was hoping would be written, I did not want it to materialize in the way Born To Run has. Born To Run has ignited a revolution and has dispelled much of the status quo in distance running. It has established a new fad and its main ministers are fringe, not-to-be-trusted types with growing agendas. And so, I watched for a year from a distance as the author’s ideas were idolized and spread, and as taking off the shoes became all the rage. I didn’t want to like the book and walked by it numerous times in the bookstore. When fellow runners chatted about “The Leadville Chapter,” I pushed such banter out of my consciousness — though I did think kind of interestedly, “Is there really an entire chapter dedicated to Leadville?!”… But still I waited… with upturned nose.

Somehow though, eventually, I decided I had to see what all the fuss was about; I had to listen to the barefoot argument for myself; I had to pick up the book. And so for a week, I looked forward to my daily run and my BTR fix — and as I began, I caught the bug and drank a little taste of the cool-aid. And got hooked.

Now, I can only recommend this superb book to you — you who has perhaps been sitting this one out yourself. BTR is worth your time! And here are 10 reasons why:

1. The Author bios Emil Zatopek – arguably the greatest distance runner of all time (alongside of Haile Gebresalassie…) and shares new anecdotes such as the touching meeting between Ron Clarke and Zatopek…

3. The Tarahumara Tribe get their honest moment in the spotlight — and shine!

4. Did I mention “The Leadville Chapter”?!

6. A great case for barefoot running is made. (And for the record, I am not a barefoot runner, nor do I plan to convert to barefoot any time soon. Nevertheless, the core information in the book on this topic helps the runner to rethink running form, cause of injury and footwear.)

8. BTR provides a clear glimpse into the wonderful wacky world of Ultra running — and may just inspire you to jump in!

9. BTR is superbly written by a veteran, tested and trustworthy author.

10. From Sheehan to Faulkner, Barefoot Ted and William James, to the Tao Te Ching to Theo Van Gogh — this book is rich with wisdom.

Go get Born To Run in paper, on your tablet or download it on Audible.com to listen as you set out on your next run. You will be better for it!

← Running in such a way…
Running at Night →