Stepping Up to the Luna Bar 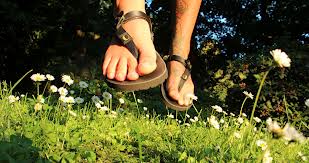 Stepping Up to the Luna Bar

Yeah, I am waiting by my door once again, this time looking for the mahogany blur of the UPS guy — I, a charlatan of minimalism, sometime rejector of running materialism, sage of the clean/dirt trail… have again wandered into the cyber shopping-sphere — now venturing into 21st century marketing, but of an ancient running ware.

This time, it isn’t mechanical wizardry, a 21st century app or a golden singlet that I seek; today, I await a pair of Luna running sandals. Specifically, I am looking forward to strapping into the 5-ounce (heavy by Luna’s standards) Leadville sandals. Priced at $95, these are no cheap alternative to Nike’s latest flare or Brooks’ modern offerings. Luna sandals, still in a perpetual beta mode, are an investment by faith into a running aura. A way of life: more running, more trails; less restrictions, no arch supports, no motion control. Free toes at last and no uppers! Which brings me to how I came to order a pair. 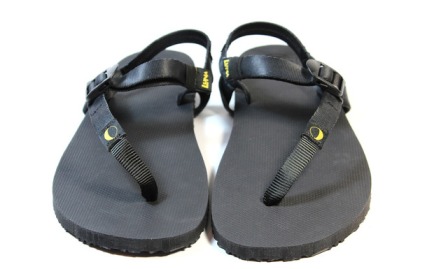 My story truly began only months ago when I met Luis Escobar at the SLO Marathon here in my adopted hometown of San Luis Obispo, California…. No, it actually predates this serendipitous meeting. My story really began the moment I hit the play button on my iPhone and began listening to Christopher McDougall’s Born To Run:

“The best runner leaves no tracks.” ~The Tao Te Ching

From this well-chosen first quote, I fell headlong into a trap. The trap of rediscovering my love of running. Like thousands upon thousands who have finished McDougall’s opus, I slowly woke up to the realization that what I loved about running, what got me started in the first place 30 years ago, was the sport’s simplicity and universalism. Like the author’s title, I remembered that I was born to run — and as I listened through the book and finished it for a second time in as many weeks, my desire to “run free” – whatever that turned out to be – was cemented. (In the present, running free is looking a lot like running in Luna Sandals….:)

In the months that followed, I was fortunate to forge a friendship with Luis Escobar, photographer for Scott Jurek and the American cadre who first joined Caballo Blanco in the Copper Canyons of Mexico for that historic inaugural race between the cultures which is the stuff of the climax of the book. Not long after the SLO Marathon, I joined Luis and company in Death Valley for an epic running retreat which I have documented in one of the most popular posts of this blog. It was during this weekend that I got my first look up close at Luna Sandals. I was not too interested.

Watching Patrick Sweeney dance almost timidly against the razor sharp Salt Flats at Badwater, fearful lest he slice open his exposed heel or  toe,  I wondered why anyone would trade in my Brooks Cascadia’s for the Leadville sandal.

But then I raced at the Born To Run Ultra Marathons in Los Olivos, California. There, Patrick Sweeney – whom I still have never seen in anything except Luna sandals – handed my number to me and then some on the 50k course. And he ran to a 3:49 time … in his Luna’s.

Now, I took notice! How could Sweeney run all that distance – at that pace – across that terrain – in sandals?? I had to find out for myself.

And so I wait. Somewhere in a Seattle back corner warehouse, I imagine Barefoot Ted, himself, gluing together the sole and neoprene, and inserting the strap plugs into place — and then perhaps personally taking my size 9.5 Leadville’s out for a test spin on the trails and roads. Very soon, I will take my own test spin — and maybe, just maybe, I will get a sweet taste of running freedom.

5 thoughts on “Stepping Up to the Luna Bar”